Venezuela: translating the revolution aims to promote solidarity with Venezuela's Bolivarian revolution by providing translations of interesting and important Venezuelan news articles and opinion pieces. It welcomes genuine discussion and debate on the posted articles.

Cabezas: The proposal for a Fifth International "is still valid"

Unfortunately I let this article sit for too long, so it's a bit dated now. Nevertheless, I'll post it anyway since Cabezas' comments on the proposal for a Fifth International are interesting, as well as his projections for the July 24 international day of solidarity with the revolution.

Rodrigo Cabezas, coordinator of International Issues for the PSUV, asserts that our internationalism needs strengthening. Venezuelan parties propose a global day of solidarity with the Bolivarian revolution for the 24th of July. 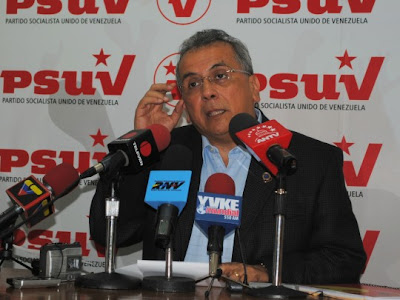 Cabezas is the coordinator of International Affairs of the Partido Socialista Unido de Venezuela (PSUV). An economist and university professor, he says that the XVIII edition of the Sao Paolo Forum, that will take place in our country between the 4th and 6th of July, “could open the debate of an international [organisation] of revolutionary parties that defend forms of organisation distinct from capitalism”.

Comandante Hugo Chavez proposed at the close of the International Meeting of Left Parties in Caracas on 19 and 20 November 2009 the need to convoke a Fifth International. The proposal didn't forsee the turmoil a proposal of this magnitude would cause. But perhaps it continues to be relevant in the context of capitalism's systemic crisis, with the 'indignados' in the streets, and with the progressive governments of Latin America.

Acording to Cabezas, “The Sao Paulo Forum is a space for debate among the progressive parties and movements in Latin America. The proposal of the Comandante is still valid, insofar as it pointed to the need for coordination, a meeting space for the world socialist left. So visionary was it that today, for example, there is the lack of a certain level of left organisation to complement the European workers' struggles. There's a relative disconnect in that sense”.

Why was Venezuela chosen to host the Sao Paolo Forum?

“All the organisations that met in Managua for the XVII meeting unanimously agreed to have the meeting in Caracas. The Sao Paolo Forum parties, from the Mexicans to the Argentinians, along with the special invitees, agreed to have the XVIII edition as an endorsement of the Bolivarian Revolution and president Chavez. The Sao Paolo Forum does not hide from that purpose. We [i.e. Venezuela] are a kind of beacon of the social movements that struggle against imperialism and that propose socialism. It’s the conviction that it's been possible to carry out a process of popular transformation here with high marks for independence.”

If it's a meeting in support of comandante Chavez and the Bolivarian Revolution, will the delegations have to carry out a specific task in solidarity with our country, above all when it has been shown that the opposition, in coordination with the United States, seeks destabilisation in the context of the presidential elections?

“On the initiative of the Venezuelan parties in the Sao Paolo Forum (PSUV, PPT, MEP, and PCV), we will request that the 24th of July - the birthday of our Liberator - be made a day of solidarity with the Bolivarian Revolution. The idea is to have actions in all the planet's capital cities in solidarity with the revolution, at a time when the right demonstrates no commitment to democracy, when it deigns to respect the electoral adjudicator.”

What are the PSUV's proposals for the seminars and debates?

“We're projecting a seminar on the decolonisation of Latin America. We who have a Liberator of Simon Bolivar's stature cannot neglect to show solidarity with Puerto Rican independence. We're going to evaluate the recolonisation of Aruba, Curazao and Bonaire by the Netherlands. Another theme is Argentina's Malvines [the Falkland Islands]. It's very important to us.”

What will make this forum unique from the previous ones?

“We will set a participation record. We're estimating the arrival of some 600 international delegates from the five continents of the planet. Delegates will receive a gift handmade by Venezuelan women. We will present books about the Liberator, Venezuelan chocolate, and in the evenings we will host cultural events in the vicinity of the Teresa Carreno theatre.”

What will hosting an event of global import mean for the PSUV, for our short history as a left-wing political organisation?

“The PSUV is the main left-wing political force on the American continent. That's because it has been consistently, along with the government, transferring power to the People. After the meeting, the PSUV's prestige will be even greater. We wish to contribute to make the Forum a a meeting of the global anti-imperialist, anti-war grass roots movement.”

Can we speak of a new hegemony of the left in Latin America?

Posted by Owen Richards at 1:36 pm 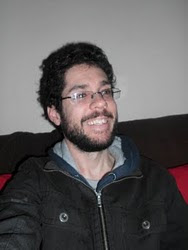